Just a quick update seen as I haven’t updated the website for awhile.

Not much to report I’m afraid apart from that it seems to be running well but probably will need a few bits of maintenance so will have to compose a list next time I am down. 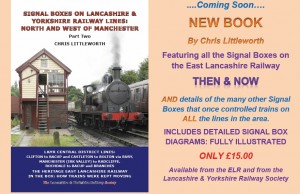 When we have been planning a new layout we have always tried to gather photographs, maps, plans and drawings which usually result in us asking on forums to which one person Chris Littleworth always comes to our rescue with signal box diagrams and track layouts. So in return we would to advertise his new book.

This will be well worth a read and im sure we owe Chris a few pints so will be purchasing a copy or two.

Firstly it’s been awhile since we had any updates with regards to the website, layouts, members etc so here goes.

Adrian Hall paid us a visit last week. Adrian doesn’t really get the time to visit us much as he lives in Spain so when he does it’s always nice to see an old friend.

Ramsbottom – No news to report.

Each section is made up of a frame work of soft wood which is generally 2inch x 3inch which has a cross frame with 1inch x 2ich. Only section 1 is slight different being made up of frame 1inch by 3inch soft wood due to being a later addition.

Firstly it’s been awhile since we had any updates with regards to the website, layouts, members etc so here goes.

Ramsbottom – Not really much to report except that we put all tools down over two weeks to run the program. It highlighted a few errors in the track work, program diagrams but all in all was a success and enjoyed by all. We hope to do this more often. The layout on the whole could do with a good clean up and the tracks giving a good scrub.

Bacup Shed –  A couple of weeks ago it was decided that we should possibly head in a different direction with Bacup Shed. This was due to many factors such as damp, mdf base board, continuous problems with the peco turntable (whole other story) and continous faults with trackwork and wiring. It was decided that the layout couldn’t really offer much in terms of interest. So with great regret it has now been stripped and a new layout will take its place but we have no name yet. Scrapped 27-02-14.

Unnamed Layout – So the fun begins all over again. The new layout will be a countryside layout similar to a GWR branch line…..but LMS/BR region with DCC and hopefully sound. It will be an end to end layout with a fiddle yard at one end. We are hoping to have a small/medium sized station, cattle dock, goods shed, small engine shed and sidings but with lots of scenery and plenty to do. We realized that Bacup shed would only give you so much to do due to it only being a shed. This way you can have 2/3 coach trains, wagons, tankers, box vans, light engine movements and more happening even at once due to it being dcc. The reason for LMS/BR region is so that way we can use existing stock between Ramsbottom and the new layout. Just have to remember to remove or add the chips first. We also did look at some real life locations such as Ewood Bridge, Summerseat and Holcombe Brook but decided to go free lance.

I received a phone call last night around 7.30pm from Roger who is Harrys son to inform me and the club of Harrys passing earlier that morning.

Harry was one who first came up with the idea of forming a club without him maybe we would never of existed. He was our first chairman who seemed to dedicate a large of his time to club and its aims.

In the later years of his life he couldnt attend as much as he would of liked due to his wife having dementia and needing full time care but when he did he would come down, run the layout and let us know of any faults.

Harry was a local postman serving the local town of Ramsbottom which led him to work with our chairman Alan Gartside and the late Roger Wilson.

Rest In Peace Harry, you will be missed by all of us from the club.